The Fragile Ground Beneath 66 Million Barrels of Oil

The Fragile Ground Beneath 66 Million Barrels of Oil

Wastewater from oil drilling is triggering earthquakes, and no one can predict where they will strike or how hard they will shake. 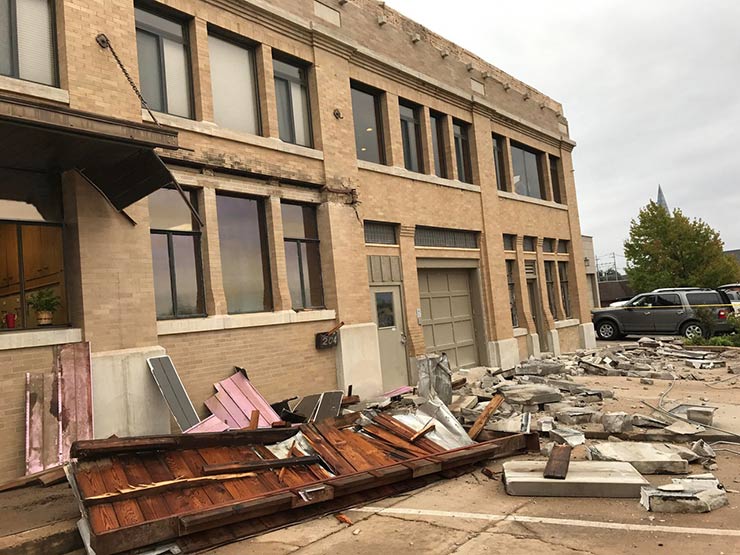 Three miles below the town of Cushing, Oklahoma, tectonic forces squeeze the rock with a pressure of more than 7,000 pounds per square inch. For years now, wastewater pumped underground as part of oil and gas development has seeped into natural cracks in that rock, easing the friction that keeps it stuck in place. Perched directly overhead is a community of 8,000 people -- and one of the largest oil storage facilities in the world.

So far, the Cushing Tank Farm, also known as the Cushing Hub, has withstood the earthquakes that have rattled the region for the past few years, the majority of which are believed to be caused by wastewater from fossil fuel production. The town itself has not fared as well. While its residents have escaped serious injury, many of its historic buildings suffered damage during a magnitude 5.0 earthquake that struck in November 2016, with an epicenter less than two miles west of town.

"It shook this building like a rag doll," said David Reid, who runs the local newspaper out of the same 1922 yellow brick building where he lives with his wife, the newspaper's accountant. "With the crashing and the shaking and the noise," said Reid, "I just didn't know how we were going to get out of here." The noise turned out to be around 15 tons of sculpted limestone crashing to the sidewalk, said Reid, who is one of several residents now suing the companies that have injected wastewater nearby.